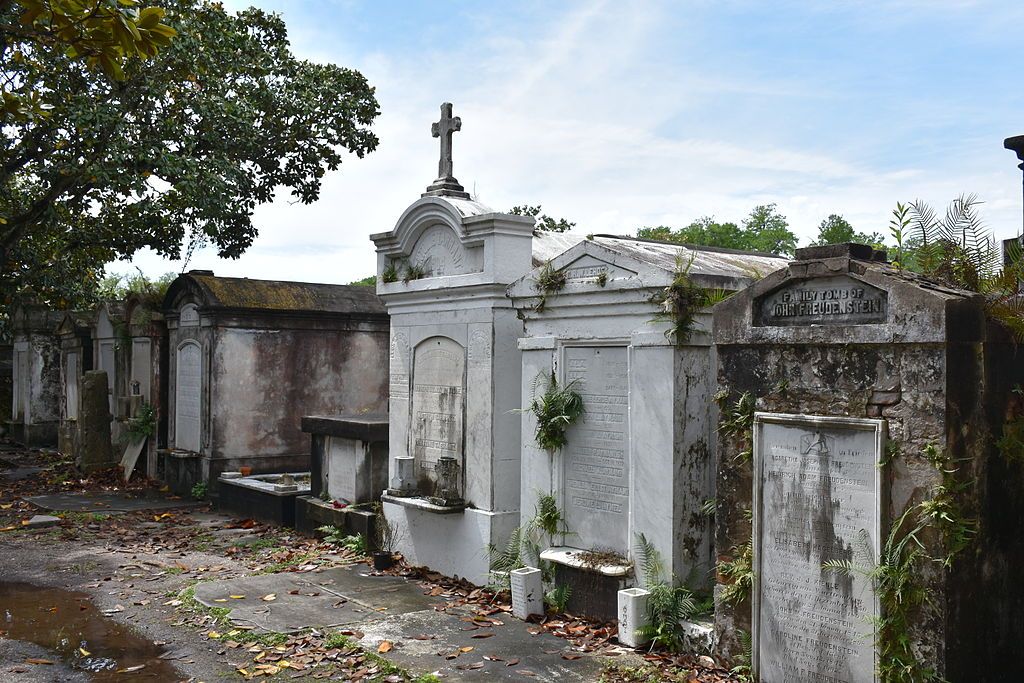 Located in what now is the heart of the Garden District, between Washington, Sixth, Prytania, and Coliseum streets, Lafayette Cemetery No. 1 is the oldest of the seven municipal, city-operated cemeteries in New Orleans. It is a non-segregated, non-denominational cemetery. There are immigrants from over 25 different countries and natives of 26 states as identified on the closure tablets.

The developers commissioned City surveyor Benjamin Buisson to develop a plan. The plan, dated March 5, 1832, subdivided the area between First Street and Toledano. The cemetery was laid out with two center aisles, a cruciform (cross) pattern, lined with trees giving it a park or garden-like appearance, and divided the cemetery into four sections. The intersecting avenues were built to accommodate funeral processions and originally paved with shells.

The cemetery was named for the City of Lafayette, which was annexed to the City of New Orleans as the Fourth District. The area of New Orleans that once was the city of Lafayette consists of two designated historical districts, the Irish Channel and the Garden District. The residents of the Irish Channel were first-generation immigrants many from Ireland and Germany, the two largest groups of immigrants to settle in New Orleans in the two decades before the Civil War. It was known as a working-class poor neighborhood, a rough and tough riverfront area. The Garden District, on the other hand, represented the new wealth of immigrants from Great Britain and the North who came and made their fortunes as cotton factors, brokers, and merchants after the Louisiana Purchase. They are often called “Southern Yankees.”

In the cemetery, there are almost 500 wall vaults on Washington Avenue which have been sealed. Only a few of the plaques are engraved.

Individual family tombs in Lafayette Cemetery No. 1 feature Judge Ferguson of the Plessy vs. Ferguson “separate-but-equal” case. Also buried in the cemetery is Brigadier General Harry T. Hays who led the 1st Louisiana Brigade. The Brunie family, buried here, were notable jazz musicians who were associated with Papa Laine and the New Orleans Rhythm Kings.

Perhaps the most famous residents of Lafayette Cemetery No. 1 are fictional. The tomb for the Mayfair witches, created by Anne Rice, in The Witching Hour, fits a combination of the Lafayette and Jefferson fireman tombs. Rice also staged a jazz funeral where she rode in a glass enclosed coffin down the center aisle to introduce her book Memnoch the Devil. The vampire Lestat’s tomb, made from Styrofoam for the movie, Interview with a Vampire, was possibly modeled after the cast iron Karstendiek tomb. Many other movies have been filmed in the cemetery, including Double Jeopardy in 1999 and Dracula 2000 in 2000. Other filming has taken place in the cemetery, such as music videos by acts such as LeAnn Rimes and the New Kids on the Block.

There are about 1,100 family tombs and more than 7,000 people buried in Lafayette Cemetery No. I, in a single city block.

Hours:
Monday-Sunday: 7:00 am-3:00 pm
Closed most major holidays
NOTE: Hours may fluctuate based funerals or on the availability of city personnel to open and close the cemetery gates. If gates are locked, please call the City Cemeteries Department at 504-658-3781.