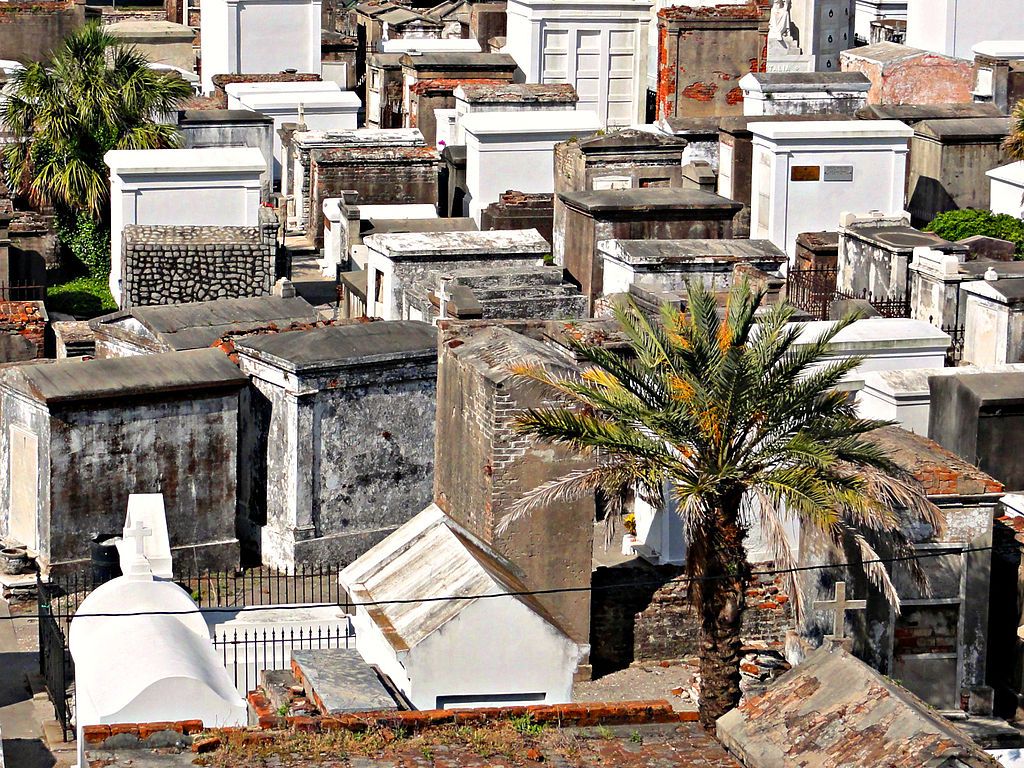 Established in the late 1700’s, St. Louis Cemetery No. 1 is the oldest existent cemetery in New Orleans and is still the site of several burials a year. The cemetery is the final resting place of many prominent New Orleans families, particularly the Creole population. Upon initial development, St. Louis Cemetery No. 1 was divided into sections for Catholics, non-Catholics, and “Negroes,” possibly referring to slaves since gens de couleur libres were buried according to their religion.

By the late eighteenth century, the cemetery for the city, St. Peter Street, had begun to fill up, and the town development had reached the site’s boundaries. Recognizing the need for the new burial place, the Cabildo wanted the cemetery far away from the center of population, due to fears that contagion and disease spread from the cemetery to infect the populace. New Orleans’ location on swampy, below sea level terrain made any high ground extremely valuable. Precious high ground would not be designated for the dead when the living could benefit from it; therefore, the Cabildo chose a swampy site on St. Louis Street. On August 14, 1789, a new cemetery was created by Spanish Royal Decree. The cemetery was placed 40 yards behind the Charity Hospital, which was located on Rampart Street between Toulouse and St. Peter Streets.

In 1796, a canal was installed next to the cemetery for the purpose of transporting goods as well as draining the swamp around the city. The turning basin was located at the intersection of Basin and St. Louis Streets. The location of the canal led to industrial development in the area, including warehouses and depots, and eventually led to the development of the Tremé neighborhood.

Initial burials appear to have taken place in a haphazard manner, leading to the current maze of tombs and aisles. Current theories about tomb and site evolution suggest that initial burials took place below-ground or in low, quasi-above ground tombs that only held one burial.  As the needs of the site grew, existing burial plots were added on to create additional burial vaults while retaining the original tomb footprints; thus, the one tier semi-below ground burial space became the fully realized above-ground tomb found throughout the cemeteries of New Orleans.

Due to its location in a swamp, St. Louis Cemetery No. 1 was constantly threatened by flooding. To combat the rising waters, sand and shells were continuously added to the site, particularly along the pathways. In 1816, the waters of Macarty Crevasse flooded the cemetery to the extent that the site was closed, and burials took place across the river.

By the early nineteenth century, New Orleans had grown, and the City wished to extend Tremé Street, but the cemetery, particularly the Protestant Section, was in the way. Furthermore, with the Louisiana Purchase and impending Louisiana statehood, the city had experienced an influx of Americans, the majority of whom were Protestant. To remedy these issues, in 1822 the City proffered a site in the Faubourg St. Marie to be used as a Protestant burial ground, later known as Girod Street Cemetery.

Further city development resulted in the shrinking of St. Louis Cemetery No. 1, resulting in a site that is significantly smaller than its original size.  For example, the pyramidal Varney monument, once located at the center of the site, now marks the entrance.  By the late nineteenth century, the area surrounding the cemetery had become chiefly residential, with few undeveloped lots left available. In 1898, “Storyville” was created in the sixteen square blocks that included the cemetery, and was bounded by Iberville, North Robertson, St. Louis and Basin Streets. The “red light district” lasted until 1917, when the Navy ordered it closed.

Significant changes started taking place to the area surrounding St. Louis Cemetery No. 1 in the mid-twentieth century. Construction began on the Municipal Auditorium in 1930, and the canal was filled in by 1938. What was left of Storyville was demolished to make way for the Iberville Housing Project in the 1940's. Neighborhood decline continued with the construction on Interstate 10. The city made several attempts to rehabilitate the area, including the creation of Louis Armstrong Park in 1976. St. Louis Cemetery No. 1 acquired a reputation as an extremely dangerous place, resulting in tomb owners, families, and locals staying away from the site. As a result, the cemetery was neglected and became overgrown.

Scenes for the movies Cincinnati Kid (1965) and Easy Rider (1969) were filmed in the St. Louis Cemeteries. Following the release of Easy Rider, the Archdiocese enacted a policy of disallowing any filming in its cemeteries, except in the case of preapproved documentaries and educational films.

Gradually, given its proximity to the French Quarter as well as increased intervention on the behalf of the Archdiocese, St. Louis Cemetery No. 1 became a top tourist attraction for the city. As the number of people on site began to improve, families and locals gradually began to come back to the site and take a renewed interest in the care of their historic family tombs.

It is the burial ground of some of the most illustrious citizens of New Orleans, including Etienne de Bore, pioneer in sugar development; Daniel Clark, financial supporter of the American Revolution; Paul Morphy, world famous chess champion; and other local and national figures.

Notable structures include the famed oven wall vaults, the supposed resting place of Voodoo Queen Marie Laveau, and the magnificent tombs of the French, Italian, Portuguese, and Spanish societies. It is also where actor Nicolas Cage decided to build his future tomb.